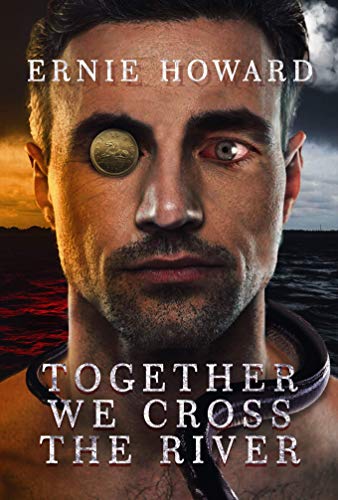 Book Title: Together We Cross the River

Available On: Amazon as an eBook and as a paperback

Jeff is an alcoholic. He’s a good man, though, and is married to the love of his life, Alyse. However, he drinks too much, and he has many burdens that he carries. Those dark scars from his childhood have led to poor coping skills to deal with life’s stresses. So, when he dies, he discovers that death is just the beginning of the journey he must travel.

To find the solace he seeks, he must figure out how to come to grips with his current reality. To do that, he must defy all the rules of his purgatory existence to be there for his wife in her time of need. But he’s dead, so how can he even accomplish this? Jeff goes on an unprecedented expedition to try to help her before it is too late. Will he succeed in his goals or will unsurmountable obstacles stand in his way?

Jeff is hopelessly in love with Alyse. But his drinking hurt her in ways that he could never imagine. This voyage he takes once he dies brings him face to face with those demons that have been plaguing him his entire life. He must learn the ropes of his purgatory-like existence, what the rules are, and how it all works as well.

One of the things he needs to do is to gain some insights into himself, who he is, and how he became who he is now. He cannot cross the river to see what comes next until he does. Along the way, he learns how his drinking hurt Alyse in the worst way and he wants to make amends. When he discovers that there is a possible way for him to be there for her, all the rules go out the window. But the consequences of his actions may be too high a price to pay.

As he gets used to his newfound abilities as a specter-like being back on his former plane of existence, he must deal with abhorrent people and gut-wrenching situations like never before. But to save Alyse from herself, he would, and does, anything he can.

Along the way, he meets Mr. Hornbuckle, his guide to Jeff’s afterlife as well as for others too. He’s a loathsome man who feeds off the negative energy of the realm and of others. He explains the rules to Jeff and is one of Jeff’s primary antagonists.

We also learn about Hatefuls, gruesome creatures who cling to your soul. The more negative energy you exude, the more Hatefuls hang around you like a dark cloud. They’re also an indicator of how dark your life circumstances are, and they’re present on all planes of existence to anyone who can see them.

In purgatory, Jeff meets a couple of people who played an important role in his life. These interactions illuminate Jeff’s character development and help Jeff understand what he must accomplish while here.

However, the influence they had over Jeff’s past is crucial for him to figure out what to do next. Their interactions with Jeff plunged me into the depths of despair with what they had to say. They were well-drawn characters, and I felt the sadness of their burdens as well.

The author’s creative spin on the different planes of existence, from purgatory to heaven and hell, is an imaginative one. He takes the myths and religious beliefs about the afterlife and makes it his own without veering too far what them. While not adhering to one particular religion, he manages to craft an afterlife experience that makes sense, seemingly familiar to what we think we know about it while being unique.

Life and death are not treated as a trivial thing but instead serve as a perceptive reflection of the way Jeff lived his life and how his death affects both himself and others.

The misery, the desolation, the horror, and the depression surrounding Jeff’s current state of existence is a bleak one. However, the briefest glimmer of hope galvanizes him to take action like never before. This energizes the book in such a way so that the perilousness of the situation is keenly felt. I could hear the tick-tick-tick of the clock as time runs out for Jeff to save Alyse from the pit of anguish she finds herself in.

In writing the book with such a suspenseful style, the author weaves all these different ideas together into one poignant narrative. He personalizes it so much, I could not help but feel as if I was experiencing Jeff’s life as if it was my own. This continues to be one of the author’s signature strengths and he utilized those skills extremely well.

The love between Jeff and Alyse is the driving motivation over the course of the entire novel. Their relationship feels real, lived in, and relatable to anyone who has ever been in love. The authenticity of their love is why my heart was torn asunder emotionally several times over by the time I read the ending. It was raw, earning its ending in a potent way. It provides the touching payoff you want, but in an unexpected and surprising way.

The tragedy of Jeff’s circumstances hangs over everything like a fog. I felt the weight and enormity of Jeff’s situation. At the same time, I could see the love that drives Jeff’s actions. My interest and investment in that relationship with Alyse are what drove me along, continually turning the pages to see what would happen next, long after I should have put the book down to go to sleep.

Finally, I must compliment Artie Cabrera, the cover artist. He perfectly encapsulated everything about the novel and its themes into one perfect image.

This is easily the best and the most intense story I’ve read by this author to date, and that is saying something, considering some of the dark tales he has told. Take this journey to cross the river. While it is a rough ride emotionally given the subject matter, it is a journey well worth taking.

2 thoughts on “Book Review: Together We Cross The River by Ernie Howard”