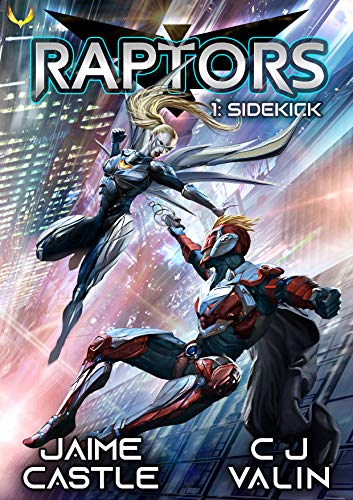 Available On: Amazon as an eBook, a paperback and an Audible audiobook

Sawyer William Vincent is not your average sixteen-year-old teen. While he tries to keep a low profile in school by day, he is the Red Raptor by night. At least, that’s the code name he wants, not the one his boss gave him. His boss/mentor is the Black Harrier, a stoic Batman-like figure. Together, they patrol New York City, fight supervillains, protect innocents and stop crime in its tracks.

Lately, Black Harrier, whose real name is Frank, has been distracted, though Sawyer doesn’t know why. Frank keeps his thoughts to himself. Though Sawyer is very independent, very intelligent, does nightly patrols, and is more than capable of holding his own.

He can handle thirteen bad guys in a back-alley brawl, after all. But when his mentor inexplicably disappears, it’s up to him to figure out what happened and try to rescue him. All without getting himself or anyone else killed. Can he handle the biggest challenge of his life to date?

This story has a lot of different ideas and themes going on, but it deftly balances all of them. There’s the main story of a teenager who fights crime as a superhero equipped with the latest in technological gadgets. There’s also a missing mentor who is the closest thing to a father that Sawyer ever had. Trying to find him, he discovers a deep secret from Frank’s past.

Then there’s the teenager element of trying to hide how skilled he is while trying not to draw attention to himself. Which is especially hard when the school bullies target him. All the while, he’s sneaking in and out of his apartment at night while hiding his superhero identity from his alcoholic mother. Then, he meets a new female hero on the scene, Osprey, who is about his age, really cute, and sets his hormones on fire.

All of this combines into an adrenaline-fueled, intense, and action-packed finale that incites chaos across the city. It brings out all the crazies and supervillains in one humongous riot where scores of lives are on the line and it’s all up to Sawyer and his allies to stop it once and for all. It’s harrowing on both a superhero level and on a personal one, as the stakes keep climbing in a race against time before all is lost and the consequences of failure will be catastrophic.

The entire novel is told from Sawyer’s point of view. As the reader, we get to personally experience what his life is like in all its aspects. He’s very smart and gifted as well, as he can not only remember things perfectly, but he can also mimic them perfectly too. So, it doesn’t take him long to learn things like martial arts skills or anything that he can see. YouTube is a very useful website for him to learn helpful tools of the trade like parkour.

He’s in high school and he can’t risk being outed as a superhero. So, he needs to fly under the radar and intentionally hide his skills from others who don’t know his secret. Lowering expectations of adults like the school principal, his teachers, and his mother is part of that plan. But it creates many unusual and funny complications as well.

How would you feel if you’re targeted by bullies but cannot use your prodigious skills to mop the floor with them in one well-placed move? Yeah, that level of frustration. Don’t forget the supervillains and bottom-feeders he must outwit and outsmart when he fights crime. He’s a teenager as well, so add in the awkwardness of dealing with a new girl who aspires to be a superhero with the technology to back it up.

Finally, there’s the frustration of dealing with a mentor who doesn’t take his opinions into account and even looks down on him when dealing with him. As the “Robin” to Frank’s “Batman”, even though Sawyer is highly skilled and competent, Frank still insists on using his Red Kite moniker and calling him his sidekick when all he wants to do is be called the Red Raptor and be an equal partner. This demonstrates teenage identity issues are at play as well.

Sawyer is quick with the witty quip with all this going on while fighting bad guys, just like Spider-Man. But that’s only part of the humor present in this novel. Teenage situations like hormones, girls, and misunderstandings among clueless adults lead to many laugh-out-loud moments in this novel. Things like Amber, the helpful artificial intelligence that talks to him in his helmet.

She always says things in a sexy way that also provides way too many distractions while he’s crimefighting. These personality traits make for a well-rounded main character whom I rooted for to succeed as he swooped among the skyscrapers of New York City trying to figure it all out.

Frank is an analog of Batman/Bruce Wayne: he runs an enormously successful company, has a ton of cool gadgets, cutting-edge technology, and is a billionaire. He’s quiet, disapproving at times but also demonstrates an affection for Sawyer, in his own understated way. But he’s also a veteran and bears the scars of that.

He also has a tragic history as the Black Harrier, especially when it comes to his supreme nemesis, Chef Maléfique. This individual has caused untold horrors in Frank’s life, which Sawyer learns more about over the course of the novel.

The story could just settle on being a carbon copy of any number of Batman stories. But the authors make this a refreshing take on a Batman tale and elevate it to the next level. When Batman and Robin’s origin goes one way, this novel goes another. Where Batman’s origin zigs, this novel zags. It frees the authors to make this story their own, infusing it with originality while building upon the more familiar aspects of what we know from other superhero stories and tropes.

For example, even the alcoholic but caring mother who has a history of poor life choices makes some surprising changes in her life which causes even more frustration for Sawyer. Just what he doesn’t need. In any ordinary story, she wouldn’t change, and her ignorance of Sawyer’s superhero life would just enable the story to continue with the status quo.

The whole novel works like that – it’s not afraid to change things up and throw in many exhilarating ideas. Every character experience growth in their lives from the beginning of this story to the end. Things are irrevocably changed, for better or for worse. There are some jaw-dropping surprises and unexpected revelations for all our main characters and their relationships with one another.

There’s also some great world-building here, as we see more of the superhero Guild, a Justice League/Avengers group of superheroes who help protect innocents across the entire world. Frank, like Batman, also has a history of sidekicks whom he’s worked with in the past. We learn more about that history while seeing how it also impacts all our characters in the present. I suspect that we’ll see more of this throughout the rest of the Raptors trilogy.

The painted art of this cover by Luciano Fleitas just took my breath away with its awesomeness. It really sends my imagination soaring as it captures what it’s like to be flying amongst skyscrapers while fighting crime.

This is a humorous, fast-paced, and compulsively readable novel. I read through it in a short period of time and whenever I put it down, I couldn’t wait to pick it back up and see what was going to happen next. It’s a fun and exciting superhero adventure while also filled with relatable characters. It’s not afraid to shake up the normal superhero genre and makes for sensational storytelling.

This is the first novel in the Raptors superhero adventure and I loved it! As a result, I really can’t wait to read the next two novels in the trilogy as they come out over the next couple of months.

Previous Indie Athenaeum book reviews about stories written by Jaime Castle, also known as Steve Beaulieu, include “In Your Closet and In Your Head: A Monster Anthology” and “Bridge Across the Stars – A Sci-Fi Bridge Original Anthology“

Previous Indie Athenaeum book reviews about anthologies that contain short stories written by Steve Beaulieu and by Christopher J. Valin include “Once Upon a Time in Gravity City“, “World Domination: A Supervillain Anthology“, and “It’s A Bird! It’s A Plane!: A Superhero Anthology“.