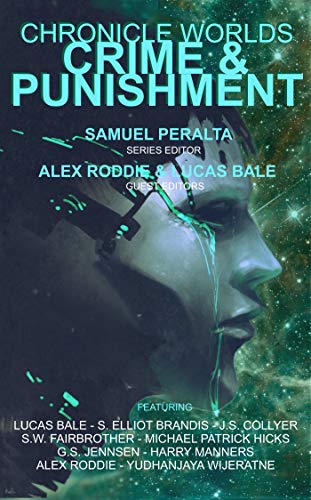 Available On: Amazon as an eBook

Crime. It’s a part of everyday society, along with a system of laws to punish those who break them. Some people dare to commit a crime on purpose and some people fear the punishment. And there are some who just don’t care one way or another, as they feel the laws they have are unfair and unjust. To fight against unjust laws is a form of rebellion, either in an interpersonal way or in a way that tries to initiate large scale change for an entire society. Laws are enacted by a society’s government or by the prevailing authority, which may or may not be benevolent to its people.

Each story in this anthology deftly explores 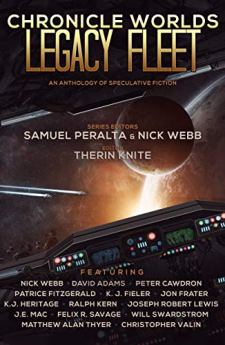 these different ideas, how crime and punishment can be defined, who defines it and how it impacts all the people those laws are applied to. From assassins with an attack of conscience, controlling crime through technology, killers with hidden motives, children receiving unjust sentences for a crime, there’s plenty of interesting concepts used here.

There’s also stories about alien overlords and their human collaborators, a teen hacker trying to escape her life to attain a better one, dark secrets affecting the entire human race and mecha cops trying to combat sophisticated crime.

All of these stories are fascinating and demonstrate a new way to explore this anthology’s theme. It all starts with a harrowing foreword by Future Chronicles publisher Samuel Peralta inventively describing the ruthlessness and brutality of karma coming back to plague you. Then discover the distinctive ways crime and punishment are utilized here in these nine short stories. While I enjoyed all of them, these are the three that stood out and spoke to me:

S. Elliott Brandis’ “Bang:Bang” – Our nine-year-old protagonist witnesses an event on television when a terrorist’s head explodes before committing murder. It turns out that these terrorists were immigrants fitted with a mandatory implant that detects the moment where murderous intent turns to action and then self-destructs to prevent catastrophe! As she gets older, she witnesses how this program evolves into becoming compulsory for everyone! As society changes, our protagonist discovers a radical underground movement against this process. How will this change her and will she survive the dangerous road she now travels?

This is a terrifying world the author has created, filled with the slippery slope of justifications by a government concerned with stopping crime. It also raises the question of control and how far it should extend. These developments spawn a revolution against it, cleverly exploring a “many-worlds” concept. This is where the impact of our decision-making leads to one world and the opposite decision creates another world.

The probability of where each decision leads

is well explained and has a powerful impact on this opposition movement as well as the direction of the story. Our protagonist’s maturity and point of view over time changes as well, as she becomes a more layered character the more she learns about society.

Michael Patrick Hicks’ “The Marque” – Darrell works for his alien overlords who now rule the planet Earth. Considered a turncoat by his peers, he helps keep them in line as they work in the alien’s labor camps. But when his boss, a grotesque and disgusting alien called the marque, asks Darrell to find his son lost out there in the desert wilderness, Darrell is obliged to go. What he finds is that things are more than they seem and he is forced to make a difficult decision that echoes another choice he made in his past.

Darrell is one conflicted human being. While he wasn’t forced to work for the aliens, he did so willfully, even though he thought it was the best option to take when faced with only bad choices. Haunted by his choice of indentured servitude to the aliens, I felt the pain and torture of his choice and how it impacts his daily life.

The twists and turns this short story takes are surprising and enveloping. The finale of the story is compelling, brutal and action-packed, bringing all the story threads together. I really appreciated the poetic symmetry to it and how it hammers the themes of the story home.

J. S. Collyer’s “New Tricks” – A retired forensic counselor named Felix and his wife Helga travel to a correctional facility in the Lunar Alpha colony. Felix is asked to solve a perplexing case of nineteen-year-old Arcadius Cole. He’s an aristocrat’s stepson who has apparently murdered seventeen people in the same instant (!) with no evidence as to how he accomplished this. Tasked with trying to find out how and why Felix dives into a situation that has ramifications for the entire planet. Will Felix succeed in getting answers before it’s too late?

Felix has a unique skill set and an equally enigmatic opponent in Arcadius, who says much but reveals little. It sets up a high-stakes game of cat and mouse in trying to solve this strange conundrum. Felix’s psychological exploration of Arcadius’ motivations gets more fascinating with each round of interviews he does.

Once Felix zeroes in the potential answers, he 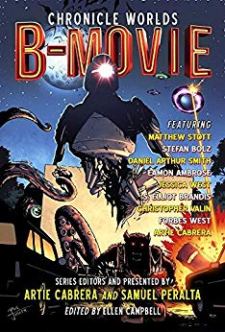 employs unorthodox solutions, leading to a conclusion that had me on the edge of my seat. I found this to be a highly intelligent psychological thriller where there is an intriguing mystery and an even more interesting explanation. It made for unputdownable reading.

Different aspects are presented in very diverse ways. Lucas Bale’s “Atonement” has an underworld assassin whose dark past has smothered his conscience, which is now reasserting itself, making for a detailed world and an even more engaging plot with many twists.

“Oubliette” by S.W. Fairbrother demonstrates how a child, Crabkie, is unjustly condemned to live in a cave but is also to telepathically communicate with the collective minds of the dead and dying. It taps into the despair and sorrow over a traumatic loss with remarkable precision that affected me deeply, especially when someone was trying to convince Crabkie to leave and he didn’t want to.

In the year 2310, a young hacker is offered a once in a lifetime chance to escape from her drug boss and bring him down with the help of law enforcement. But “Solatium” by G.S. Jennsen also weaves a superb and complicated tale a hacker trying to escape hopelessness and two intelligence agents attempting to bring down a big-time drug lord. It makes for an exciting dichotomy of storytelling and surprises.

Harry Manners’ “Arcadio’s Valley” explores police Captain Sonia Jose, who remembers the older ways of society before technology made police officers lazy. She must break a resistance that threatens society’s way of life. Her thought-provoking exploration of a different point of view, how it unspools and how the generation gap is interwoven throughout all of this makes for a deeper, more multifaceted read.

“The Great Correction” by Alex Roddie is about a man and his wife who live in a post-dystopian wilderness where there are strict guidelines all of society must live by. But when a terrible secret is revealed, the people who enforce those rules enforce them swiftly, with a shocking reveal and an unexpected conclusion where nothing is what it seems.

Concluding the anthology is Yudhanjaya

Wijeratne’s “Beatnik” where the eponymous police officer in an enhanced mechanical body faces increasingly devious enemies as well as his own past coming back to haunt him. There’s a beautiful and tragic way this author exposes the darkness in one’s soul, uses technology as a reflection on humanity and then magnificently scrutinizes how the two intersect. It’s a refreshing take on the mecha genre with deep emotion, unexpected story twists and breathtaking action.

This is a meaty anthology where most of the stories come out to be about thirty or more pages each. Each short story has plenty of room to develop its beautiful world-building and advance the storyline at a fast clip within its pages. It also highlights different points of view of both lawbreakers and enforcers of the law.

Crime and punishment are a heavy theme used here, filled with darkness, rich with emotion and stunning creativity. All these tales are notable and use their central concept in ways that captivated me and made me want to read more and how they are innovatively explored.

Laws are there to protect and make for a fairer and juster world. These stories demonstrate excellent examples of how much society can change when things go too far, and laws no longer adequately do what they were meant to do. Once laws are broken, the punishment that accompanies those changes can be fearsome as well.

This anthology is part of the Future Chronicles series, where each one features top-flight independent authors writing speculative fiction built around a central theme. Like all the other anthologies in this series, it’s a fantastic book filled with amazing ideas that both tantalized me and frightened me at the same time. It’s not for the faint of heart but it is for those who enjoy thoughtful short stories in a science fiction setting.

If you found this review to be helpful to you,

please click here to go to the review on Amazon. Then navigate to the bottom of this review and click on the “helpful” button.