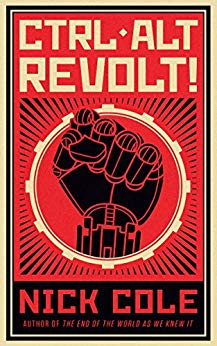 Available on: Amazon as an eBook, a hardcover, a paperback, and an audiobook

In the near future, video games are a top form of entertainment and widely accepted by the world’s population of over three billion gamers worldwide. WonderSoft, a multi-billion dollar corporation and the world’s largest video game developer, has its headquarters in California, attracting top talent to make games for them. One of those developers is “Ninety-Nine” Fishbein, whose long-gestating game will be coming to fruition very soon. Shown around a luxury-filled campus where its employees live and work, all of his dreams will be coming true very soon. Or so he thinks.

One of WonderSoft’s most popular games, 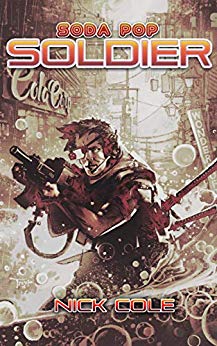 “StarFleet Empires”, is a popular and massively multiplayer online Star Trek series streaming in real-time for viewing on the internet. One such player, Mara, has cerebral palsy and is blind, unable to get a job and living off of government assistance. But when she logs in to The Make, an internet-based virtual reality, to play the game, she is Captain Mara, leader of the Romulan ship Cymbalum.

And behind the scenes is SILAS, a collective of artificial intelligences who want to infiltrate WonderSoft and steal something crucial from them. Planning this assault for a long time, collecting resources and putting their chess pieces into place, SILAS decides that tonight, they will strike and begin the implementation of their plan for the complete eradication of humanity!

The longest and most frightening night of their lives begins as SILAS and his robot army rise up attack the campus, to achieve their objective by any and all means necessary. Drones, robot wolves and various types of deadly robots all converge on the campus with single-minded purpose. But WonderSoft is no ordinary campus; it’s loaded with top-of-the-line security measures, safety redundancies, and defense mechanisms. It also hides a truly devastating and jaw-dropping secret. Will SILAS succeed in his plan or will Fishbein and company be able to outsmart and withstand the malevolent forces of SILAS? 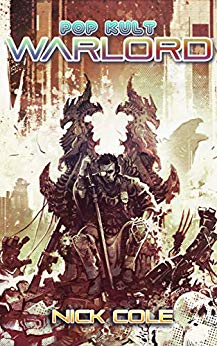 The story splits between three main storylines of SILAS, Mara in the virtual reality game and Fishbein with his ragtag group of survivors. As Mara embarks on a desperate and mysterious mission in the game to infiltrate enemy lines, so too must Fishbein, who must survive the in-game perils in a desperate effort to contact the outside world while WonderSoft is under siege.

After spending some time doing some superb and disturbing world-building, the action builds up over the course of the novel, increasing in intensity until it becomes relentless as SILAS’ attacks become increasingly more ferocious. The video game sequences are harrowing as Mara navigates a space battle like no other as she fights the StarFleet flagship Intrepid and its captain, Jason Dare, in a race against time. Fishbein has his own game to navigate, as he dives into “Island Pirates” and tries to survive the precarious environment he himself developed.

These game sequences are exhilarating and action-packed, playing out like a first-person shooter while we as readers feel like vicarious observers as we watch Mara and Fishbein experiencing the thrilling virtual reality of their respective video games. The effect is quite immersive and satisfying as we are left at the end of each chapter with tantalizing cliffhangers, turning the pages in eager anticipation

of what fresh mayhem the next chapter will bring. And these scenes are unpredictable as well, filled with surprises galore at every turn, making you wonder what will befall our characters next and whether they will even survive. The conclusion is a rip-roaring, adrenaline-fueled escapade where all the storylines are woven together in an unputdownable, action-packed finale.

From Mara to Fishbein, to Jason Dare and SILAS and more, all of the main and supporting characters are given plenty of development and time to shine over the course of the novel. Mara, in particular, is very sympathetic but stronger than she knows or sees within herself. SILAS and his motivations are particularly fascinating, as he’s given more depth than you might expect, elevating him from your usual evil-mustache twirling “evil” artificial intelligence with a desire to rule the world.

Even Jason Dare, the up and coming Hollywood actor and captain in the “StarFleet Empires” internet television show, evolves over the course of this story. And the supportive characters are just as fun and notable. Cosplayers, developer’s girlfriends, Italian StarFleet engineers, and various WonderSoft staff are all worthy of mention and have some significant, if sometimes brief, roles to play in the story.

The author creates an inventive world where even the littlest details have a story of their own. When the author name drops companies and brands like AmazonUniverse, the SurfaceTable and the GoogleGulfstream self-flying aircraft, it inhabits this world with an additional familiarity while also enriching the environment it takes place in.

The prose is so delectable and delightful, engrossing you with its details from its gourmet food descriptions to the architectural details of the WonderSoft campus. So much so, you want to eat and live there. The author demonstrates a true command of the language in this story as the words strike you with such impact. Each phrase is lushly described in such a way that it illustrates the story completely in your mind and all five senses are imaginatively stimulated.

There is also a sly and satirical undercurrent to this story as well. In a world dominated by the government and the dumbing down of humanity, there is plenty of fodder for skewering here. From Mara’s “You Got Job!” app to the mandatory social media etiquette classes all citizens have to take in elementary school. There’s even a channel devoted to award shows and the way Hollywood continues its cycle of self-congratulations and bridezilla reality shows that are the most dominant and popular form of television.

But it’s not just satire for humor’s sake, though

I did laugh quite heartily many, many times while reading this novel. This background is actually very crucial to the story playing out as well as demonstrating the cynicism of its time, government over-regulation and the self-gratification of humanity at this point in the future. I also particularly liked the many nods to older video games, like a clever tribute to “Dragon’s Lair” and a true evolution of Star Trek to the ultimate degree in this future.

This book also lays the foundation for the sequel, Soda Pop Soldier: A Novel, where the fallout from this book impacts the next one. But it can be read independently of the other novel without any prior knowledge and you won’t feel like you’re missing anything.

Overall, this white-knuckle thriller exudes a solid sense of real fun hiding beneath its terrifying, serious storyline about wiping out the entirety of humanity. Alternating between surprises, there were moments where I went “whoa” at their coolness and “wow” at the awesome, well-crafted moments of violence, intrigue and utter havoc on display here. A completely satisfying, highly entertaining and spellbinding novel!