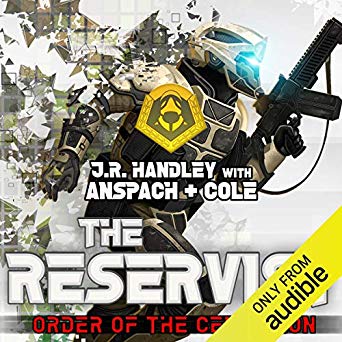 Available on: Audible as an audiobook

The Legion reservists of New Caledonia have a peaceful life. They serve one weekend a month, get Legion training and have largely ceremonial responsibilities. Their weapons, armor, and supplies are substandard when compared to the latest or the best Legion technology has to offer but it’ll suffice. Nineteen months after the Battle of Kublar, the House of Reason is on edge and wanting to quell the uprising of the Mid-Core Rebellion. So, when the alien planet Rhyssis Wan joins the rebellion, the Republic deploys Sergeant Fetch and his reservist forces.

Taken by surprise and with no experience

in actual combat whatsoever, Fetch and his soldiers are sent to Rhyssis Wan to put down the rebellion. Hard. These aliens, called Arthava, are derisively described as “traitors” and look like hyenas on two legs based on their alien appearance. They nevertheless outnumber the Legion forces by a great margin. The fact that they are a foot taller than humans with very sharp teeth only adds to their ferociousness.

Led by Captain Archer, an inexperienced Point who has a couple of redeeming qualities, Fetch and his men are sent into battle on the snowy planet. With each vicious encounter they have with the enemy, their forces are winnowed down and their supplies become ever more limited. Will any of them even be able to survive this trial by fire in combat?

The campaign to battle and defeat the enemy is a perilous one. They must face the aliens and their beastly war mounts called the charka, which look like a cross between a boar and a dog. Yet, Fetch and his forces have only their training to fall back on as they face untested waters. Each battle is grim and disheartening, as the odds continue to be stacked against them. It casts a pall over the entire novel, as the dire mood of their situation seeped into my pores and I vicariously experienced what they felt: the grim reaper coming for each one of them. 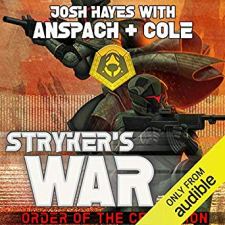 Fetch and his forces face it with determination and a bit of optimism, despite the Arthava forces throwing themselves at the Legion soldiers. The never-ending enemy forces just continue attacking and the Legion just mows them down like a scythe through wheat. But Fetch has to focus on one moment, one enemy and loading one more ammo pack at a time and just tries to survive each encounter. Each one of his men wants to kill the enemy first to make them pay for all their fellow soldiers who already died.

Each battle is more interesting than the last, with different military objectives, an enemy that never gives up and a relentless pace that rarely gives the reader a moment to catch their breath before the next wave of enemy attacks or trying to reach their next objective. From mining the space around the planet to chemical warfare, it can get disheartening and disturbing, as war certainly does. They’re dealing with a primitive yet nasty enemy who has snipers, tanks, grenades, mortars and more. But this novel feels a little different than the other Galaxy’s Edge novels, especially those in the Order of the Centurion series like this one.

Fetch is an interesting character. He’s not a

typical Legion killing machine, he’s an executive chef in his day job, making meals for the wealthy. He’s overweight too and gets ribbed by his fellow soldiers for his slight stomach pouch. But it’s clear his men love him and respect him. As reservists, they all know each other and have done so for years. Fetch has a wife, a child and a baby on the way too, so the stakes are just that much more personal.

The Point, Captain Archer, is a little bit likable at first. Like most Points, he’s coasting on his political appointment but he’s not battlefield tested and makes some mistakes, some small and some huge. But overall, this Point takes on some extra dimensions. The brotherhood and camaraderie of the Legion are well established and well known for anyone who has read this series. Soldiers who fight for their brothers in arms, they train together and get to know one another and then you die together.

This novel adds all of this into the Galaxy’s Edge mix and then some. The idea that reservists serve one weekend a month and they all come from the same planet means that they not only know each other well but they also know their families. Going to family functions, backyard barbecues, serving as godparents for each other’s children, they’ve spent much time together becoming even closer than your average Legion unit. It feels like a group of your good friends all serving together and having a good time overall on New Caledonia.

So, when Fetch worries about his men, he’s constantly thinking about the promises he made to their spouses and their families to bring them home safe. With each loss and friend that dies in a series of battles that only get worse, I felt Fetch’s humanity and sorrow much more acutely as he must make sure he and his men survive if only to properly mourn the dead later.

He also second-guesses his own decisions, cries inside his helmet, screams like a girl when facing fearsome creatures and feels tremendous pressure to make sure his men can get home, by any means necessary. In other words, he acts just like civilians might when facing a merciless enemy and the only thing you have is your training and a finger to pull the trigger of your weapon. But Fetch never backs down from the challenges he faces, not once.

There are many cool moments he experiences

too, like being outnumbered by an enemy thirty to one and he takes them all on to make sure the enemy doesn’t overrun his main forces. He also gazes in wonder as an HK-PP battle mech takes on a bunch of enemy tanks and shows no mercy. It is a ballet of poetry and death dealt out without compunction and instead of feeling numb, he’s awestruck at what he witnesses.

All of this makes this novel extra personal and added a deeper layer of emotional attachment to this book and all of its characters. Not only did it feel more severe in my gut, but it also demonstrated this quality in a way that is more profound than the previous Galaxy’s Edge novels have ever done before.

There is a lot of talk about Oba, the Galaxy’s Edge version of God. As soldiers trying to cope with the constant specter of death hanging over their heads, the use of faith is more prevalent here than in other novels in the series. Given the possibility that death might come for any of them at any moment, this use of faith is utilized well. Given the intensity in all the battle sequences, trying to find peace in case they meet their maker is important.

Given that this is the fight of their lives and the odds are stacked against them in a war of attrition, each victory or defeat lies in how well they fight and use whatever resources they can scrounge. Each crucial strategy, ally, weapon and cunning methodology they use is all in service of protecting their men. All for the purpose of winning before supplies and soldiers are all expended, and a victor can be declared.

The audiobook narrator perfectly captures that sense of desperation, the visceral brutality of combat and its effects on the psyche. The narration placed me in Fetch’s shoes and imbued the performance with an extra gravitas, elevating it to the ultimate level.

I keenly felt the sense of dread that creeps up your spine when you know the enemy is coming for you, but you don’t know when. That feeling of the floor dropping out from under you as you realize that you need

reinforcements and none are coming. I also felt the emotional distress that comes with watching your chances of survival slowly dwindle to the barest of slim hopes, yet knowing you must fight on nevertheless, to the last man.

You don’t have to have read any of the other stories in the “Order of the Centurion” series to understand this one, as each of them stands alone and tells a complete story. But when viewed as part of an interconnected universe, it meshes well with them while also successfully adding to the larger body of work. As a result, this is an exquisitely powerful novel and one of the best Galaxy’s Edge stories I’ve experienced to date.

Previous Indie Athenaeum book reviews about stories in the Galaxy’s Edge universe include “Galaxy’s Edge – Requiem For Medusa” and “Iron Wolves – Order of the Centurion – Book 2“.

If you found this review to be helpful to you, you could also click here to go to the audiobook on Audible. Then, navigate to the “Audible.com Reviews” section lower on the page and go to the “Sort By” box. Choose “Most Recent” and then you will see The Indie Athenaeum’s review, dated 7-19-19. Finally, go to the bottom of the review where it states “Was this review helpful for you?” and click on the “helpful” button.