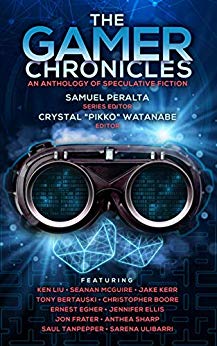 Available On: Amazon as an eBook

Video games are more popular than ever, with many of the top games outgrossing the biggest Hollywood blockbuster movies. Integrated into our popular culture, gaming of all kinds only continues to grow. Celebrating this theme, it features a wide variety of stories about games and future technology. From first-person shooters, text-based gaming, augmented, virtual, simulated and mixed reality experiences to space simulators, live-action role-playing (LARPing), role-playing games (RPG), remote control corpses (!) and much more.

Its foreword features a stunning poem about an intriguing high-stakes tarot card reading by anthology series producer Samuel Peralta and serves as a great lead-in to the anthology. All eleven of the stories here kept my eyeballs glued to the metaphorical gameboard but there were several standouts for me:

Enforcer in the addictive, bloody and violent Xombie virtual reality game, which she is testing for VasTek Gaming University. Coming from a troubled background, she meets Sing, a mysterious woman with a dark past as well. But when their dual stories combine, all hell breaks loose, mysteries are unraveled and their lives are put on the line! Will either of them even survive the experience?

Grace and Sing are given unique backgrounds that make you sympathize for their situation and the horrific pasts they endured. Their pasts have a direct impact on their respective realities and how things are definitely not what they think they are. I was blindsided as all was revealed, as well as how emotionally raw it all was. I even felt my head pounding and my pulse quicken as if I was right there with them trying to evade those who would do me harm. All of this is wrapped into an action-packed, non-stop thrill ride of sheer brutality as it reached its climactic end. Grace and Sing display a ferocity that made me stand up to cheer them on even as their odds of survival continued to drop and my heart was being ripped to shreds. Easily the best story in this anthology.

Jennifer Ellis’ “Mo Lightbearer” – Maurice is a high school student who is obsessed with video games, wishing he could work in the video game industry as a game tester. But when a mysterious game company approaches him about an experimental augmented reality game, Maurice falls into a dangerous world where he constantly questions whether it’s a game or whether it’s reality. How far will he go until he figures it out?

Maurice has never played a game quite like this before. In the game, he goes out at night and looks for people committing crimes and saves people. The story slowly grows more violent and more disturbing the longer he plays and the body count slowly rises. And the method used to create weapons in the game is ingenious. The real-world ramifications of Maurice’s actions continue to escalate and lead to a thrilling climax where he must make the most crucial decision of his life. It’s an engrossing story that drew me deep into it and I couldn’t guess what was going to happen next.

Ernest Egher’s “Game Chat” – Harry and his teenage friends spend a lot of time inside a space RPG but are relentlessly pursued by an unknown enemy who continues to decimate them, sometimes using space pandas (!) to do so. In reality, Harry is wondering whether their enemy is someone in his school and tries to find out who they are. Can Harry figure out who it is?

Not only is it a stark contrast to the two previous

stories I mentioned above, but it also had the most sparkling, hilarious dialogue between teenage friends, a captivating conundrum and the most uproarious conclusion I’ve read in a long time. The bonds of friendship are illustrated superbly through their in-game dialogue, actions, teamwork, willingness to help and even to sacrifice themselves for one another. This is the funniest story of the collection with the most unpredictable ending.

It was really difficult to choose my favorites, as all of the other stories were quite notable in their own right. Tony Bertauski’s “Dupe” was the most gripping and immersive mystery that kept me guessing about what was happening with a non-playable character (NPC). And Jake Kerr’s “Hacking Dad” was a very touching simulated reality game ever about a kid without a father that had a beautiful earnestness to it.

Sarena Ulibarri’s “Sick and Tired” was about a game about what it’s like to get a disease and how we can take health, one of the most important things, for granted. Ken Liu gives us a text-based science-fiction gaming adventure with “The Clockwork Soldier” that had a really touching twist. And Anthea Sharp’s “Virtual Hero” perfectly blends Massive Multiplayer Online (MMO) games with a timely and intense tale of kids being held hostage in a school.

Saul Tanpepper’s “Love, Virtuality and the Good Kill” had innovative dual stories about the horrors of using remote-control corpses that mimic live human beings in a military capacity. It also exemplifies what happens when self-care gets neglected because gaming becomes an obsession. Jon Frater’s space simulator “The Sandbox” was a delicious and engaging story about the consequences of what happens when the real world and the virtual world intersect, with a wickedly unexpected ending. And Seanan McGuire’s “But We Were Heroes Once, in Empty Places, After Dark” showcases LARPing with some poignant relationships and jaw-dropping revelations.

All the stories in this anthology defeat the big bosses by the end and tell riveting tales of the highest caliber. There are even some wonderful messages about parenting kids who love to game and some morals subtly buried in the text about the dangers of compulsive gaming. You don’t have to be a gamer to enjoy the stories here, as each of them sweeps you into their tales, effortlessly telling spellbinding stories utilizing its chosen type of gameplay as a narrative framework. Frankly, it’s a top-notch anthology that earns all the high scores. The game is on!