Available On: Amazon as an eBook and as a paperback

A science fiction collection of four short stories featuring robots and cyborgs as its theme, all of them are irregular, interesting, offbeat and enthralled with their storytelling. It also features a wide variety of stories, from humorous to military sci-fi to post-apocalyptic to really strange and alien.

general is also an intelligent robot who’s considered a fossil in the mechanized army filled with humans inside high-tech battle suits. Long-lived and experienced in the art of war, his troops are up against the enemy Erudians, who are putting up a challenge. But will he succeed? The story kept me riveted, with creatively staged battle scenes, clever strategy and delightful character-building flashbacks that give the general a lot of depth, especially for a robot. Mikeal’s opinions on humans and cyborgs is also a surprise and adds nuance to an already fascinating character. The action is well paced and kept the story moving to the point I was disappointed it was over. I need to read more about this universe, please.

Rhoads Brazos’ “Pest Control” – A crew is carrying cargo to a space station but discover they picked up some unwanted guests in the form of carnophages completely infecting the ship. Having to disinfect before being allowed to dock, Geoff the cyborg has a peculiar way of going about his job, which is more difficult than he thought! Wacky, strange and captivating, with peculiar language and humorous situations, I never would’ve thought killing bugs could be so entertaining … or so perplexing, as there’s also a mystery intertwined into this tale too.

S.H. Mansouri’s “Imagine All the Insects” – Eric is a soldier, protecting the human colony on Mars from the threat of an insect invasion. But these insects or anything but ordinary and Eric and his group are ordered to exterminate them! Eric sympathizes with them, 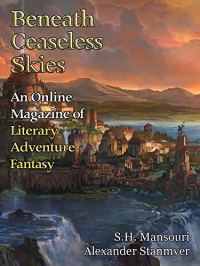 so what will he do? This is an unconventional and absorbing tale about how alien life shouldn’t be judged prematurely that also effectively demonstrates how music is a universal language that crosses all communication barriers.

Nick Cole’s “Con4n the Cybarbarian” – In a post-apocalyptic future where artificial intelligence rose up, humans eke out an existence where resources are scarce. As Danwards struggles to find shelter and safety, he comes across a youth who has memory problems. Trailing the youth are mutant ape-hounds (!), who sense easy prey. Will either of them survive? No one tells atmospheric apocalypse stories like this author, whom I’ve read before. His words filled my imagination with rich images that stimulated all my senses

and painted a lush portrait of a desolate and dangerous landscape. I was held captivated by the lethality of this world and felt threatened as I read it. Mesmerizing prose and surprises galore bring out that old-fashioned sense of wonder in a story that left me breathless.

I’ve read A.K. Meek and Nick Cole before, so their stories caught my attention. I was pleasantly surprised by the other two authors and greatly enjoyed the tales they had to share as well.

The cover also has a lot of pizzazz, vibrant colors, a dynamic style and truly represents the palpable excitement and the right amount of pew! pew! action you’ll find in the stories themselves.

This will be a quarterly collection of science fiction short stories featuring some fresh faces with newer authors as well as established ones. This makes for a unique collection with grand world building, boundless creativity, intriguing characters, and wonderful stories. I eagerly await the next one!