Available on Amazon, Barnes & Noble as an eBook and as a paperback

Stories set in space lend themselves to a wide variety of settings, futures, technology, aliens and overall, possibilities. From space marines to nanotechnology, mysterious asteroids, corporate espionage, strange creatures, artificial intelligence, intelligent dolphins, interstellar park rangers, and a planet hiding a dark secret. All of this and more can be found here in this anthology and each story grabbed me immediately.

Sometimes, with an anthology this large, there tends to be overlap in terms of theme, setting or aliens. That is not a problem here, as each story is clever, different from one another and presents unique points of view. Not just humans, or soldiers, but robots, spies, journalists, scientific researchers, and even pirates. There is no shortage of imagination on display.

Each story also takes on a different tone. You

get the pulse-pounding thrill ride, the mystery of something new and undiscovered, the alien beings whom humans don’t understand as well as the thought-provoking questions about the nature of humanity and their place in the universe. There are many questions posed about not just whether humans can do something but rather whether they should, as well as some cautionary tales about whether humans can change for the better.

From a large canvas involving a galaxy to one person’s coping with grief, each story is emotionally provocative, making me feel everything from elation to deep sadness and everything in between. But all of them are delightful to read from cover to cover, intriguing me with their storytelling skills and imaginative new worlds.

With an insightful introduction by renowned sci-fi author Kevin J. Anderson on his love of short stories and how he discovered science fiction, this entire volume features seventeen fantastic stories. But, there are a few that are particularly noteworthy:

Rhett C. Bruno’s “Interview for the End of the World” – Trass is the director of the Titan Project, meant to bring three thousand people to deep space while hibernating, all 146 hours before an asteroid destroys Earth! Will he be able to lift off in time and will the plan go off without a hitch?

With a grand plan on how to survive this calamity, Trass is filled with sadness about the heavy responsibility that weighs on his conscience. This gravitas lends a lot of dramatic weight to the story, as Trass wants to save everyone but has to be picky in how he chooses. But the tension through the latter half of the story brings it all together with an explosion of violence and unpredictability as the asteroid approaches, along with a deadline for humanity.

Jason Anspach’s “Queen’s Iris, or: The Initial Adventures of Roderick Langstrom, or: The Tale of General Smith, featuring Roderick Langston, or: Space Pirates” – Among the stars, vast empires wage wars and the queen of the Runykian Empire needs help against the Duluth Empire, “the filthy disloyal dogs” as they’re called. Enter Langston, a pirate with an unconventional plan, but will it succeed?

Langston is a pirate not unlike Johnny Depp’s Jack Sparrow from the “Pirates of the Caribbean” movies, but more cunning and even ingenious. His plan to attack the Duluth Empire is smart and on the surface, looks filled with crazy madness. But the story is filled with such moments while making me chuckle often with its ludicrousness as well. It goes for the gusto and pulls no punches with its humor, outrageousness and its plot twists. This story is also a breath of fresh air within the entire anthology, as it doesn’t take itself too seriously. It’s a truly humorous romp filled with many uproarious moments.

like creatures called buzztops have invaded the Earth from another dimension and show up when least expected, opening up portals in search of human meat! For the past four months, sixteen-year-old Carrie has been on the run with her mother, aunt, and uncle in their SUV to avoid them. Can they even stay alive?

This tale is infused with frantic chaos, as there’s no safe place to hide when they’re constantly on the run and their lives are always being threatened. I felt under a lot of stress as I read this, as my sense of complacency was constantly shattered with each scary incident. How Carrie copes, as well as the interesting people she meets along the way, are all wrapped together into an enthralling tale that ends surprisingly.

Other stories that engaged me include Ann Christy’s “Peace Force” about one person’s desire to help clean up mankind’s mistakes as it spread across the stars. This story was mournful, insightful and a thoughtful exploration of the nature of humanity. Chris Pourteau’s “The Erkennen Job” is a twisty tale of corporate espionage and one spy’s attempt to solve a problem for his employer. It’s one of his most thrilling short stories to date that also happens to be one of the best short stories he’s ever written. 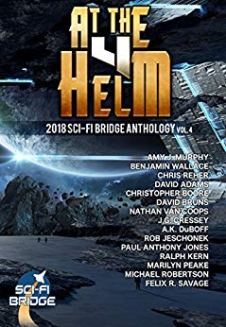 David Bruns tells a sad tale of sorrow with “Take Only Memories, Leave Only Footprints” as a Ranger who loses their partner and takes on an important job that goes horribly awry. This one impressed me with its emotional journey and heartwarming ending. And Daniel Arenson’s “The Firebug and the Pharaoh,” tells an adrenaline-fueled tale of fighter pilots who battle reptilian dinosaur creatures in the air and on the ground, on an alien planet filled with secrets.

We get to explore human and alien points of view through many of the stories such as a pointless war fought in the trenches, reminiscent of something out of World War I. I lived many different lives in this anthology, feeling what they felt and was completely immersed in every story I read in here. The sadness, the joy, the heartache, and desperation to stay alive in a kill or be killed scenario all made my pulse race and feel something so deeply, I couldn’t help but be moved.

In the past, I’ve read stories by more than half of the authors in this collection, which is what primarily drew me to this anthology. But even the stories by authors I didn’t know, I enjoyed those as well. I was constantly absorbed by everything in here. I wholeheartedly recommend this collection to someone looking for a top-flight anthology filled with talent, a grand vision for the universes each author created and an inventiveness that propelled me from one story to the next wondering what worlds I would enthusiastically explore next.

28 thoughts on “Spotlight on: Bridge Across the Stars – A Sci-Fi Bridge Original Anthology”